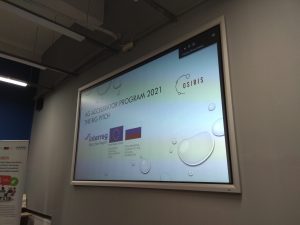 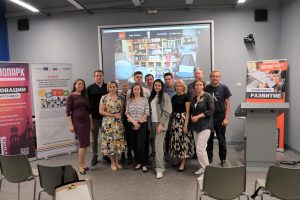 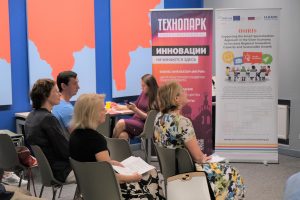 The OSIRIS Innovation Program is an international training program for entrepreneurs in the field of the silver economy. It consisted of two phases: an incubation program for early stage projects and an acceleration program for startups on a later stage.

During the program all accepted to the program companies worked on their projects under supervision of professional mentors and trackers. The program had both educational and training elements. All teams participated in individual and group mentoring sessions.

On June 18th, 2021, the final Demo Day of the Innovation Program of the OSIRIS was held. The event was organized in a hybrid format. For the pitch-session, participants from St. Petersburg were invited to the office of St. Petersburg Technopark. Meanwhile, foreign colleagues and teams took part in the session online. All teams presented the results of their work in the program to the international jury and experts from 6 countries.

The pitching teams from St.Petersburg were the following: Polymorph Nutrients, Elderlit, Voyage Voyage and FlirtParties.

The Elderlit project (Valentin Polosin) came to the program with the idea of a mobile application for the development of memory, spatial thinking, and cognitive skills in augmented reality format, based on the methods used in geriatric neurology. During the incubation phase, the project managed to conduct more than 40 interviews with its target audience. The analysis performed made it possible to refute the initial hypotheses and formulate new ones. The project abandoned the implementation of unclaimed functions such as VR / AR in the product and focused on creating UI / UX as a priority, as a very important part of the product for older people. Also, the project changed the focus of the product from purely cognitive health to mental and physical health.

The Voyage Voyage project (Irina Dzyuina) has formed the digital club of the Silver Age travelers. During the program, Irina learned to set specific realistic goals and achieve the set results. She managed to find new ideas and solutions, as well as new ways to promote the project. In addition, Irina noted the value of the knowledge gained and new contacts.

The FlirtParties project (Marina Yanova) organizes quick acquaintances for people 50+. As part of the program, Marina understood the needs of her customers and outlined a plan for the development of her product. Now the project is actively developing its marketing strategy and expanding the project team. Marina is seeking investment and mentoring support. In the future, she also plans to provide psychological support to her clients.

At the end of the session, the FlirtParties project was recognized as one of the most interesting projects, and will receive mentoring support from two foreign experts.

The Technopark of St. Petersburg expresses its gratitude to all experts and mentors who took part in the preparation and implementation of the OSIRIS Innovation Program.

Workshops: Peer eXchange LearningEvent, Russia
Peer Review seminars: RIS3 implementationEvent, Transnational
We use cookies to ensure that we give you the best experience on our website. If you continue to use this site we will assume that you are happy with it.I agree